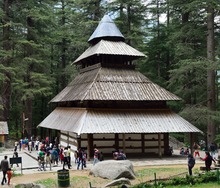 The distinct architectural style of temple construction in different parts was a result of geographical, climatic, ethnic, racial, historical and linguistic diversities in India and same was the result of Different temple architecture in Himachal pradesh.

-They are mountain like the spire of a free-standing temple.

-The top of the shikhar has amalaka, the
circular sun-disc.

-Shikhara has a curving shape while vimana has a pyramidal-like structure.

-J.P. Vogel and others have delved deep on ‘the most famous stone temple at Bajaura’ as an exquisite specimen of shikhar style.
-The solitary instance of rock-cut architecture reminding one of the thought-provoking remnant of Gupta-influenced ‘classical’ art that thrived in the hills is the Thakurwada at Masrur (Kangra). It has been called the earliest specimen of Shikhar design in the Himalayas.

The pent-roofed temples are indigenously styled circular or rectangular structures with slanting roofs made of rows and rows
of slates, designed, in keeping with the climatic conditions of the region, to keep heavy rainfall and snowfall from covering these structures for more than short intervals.

The roof extends over the covered ‘veranda’ which serves the purpose of Pradakshina round the shrine
An interesting feature very
specific to these hill temples is the peculiar arrangement of wood and stone in building the walls.
Wooden beams are laid at right angles of the walls, and intervening spaces are filled up with stone which holds itself quite
beautifully protecting the inmates from harsh climatic conditions.

A pagoda is a tiered tower with multiple eaves

-These type of Temple have tiered tower with multiple leaves,
– Its origin can be traced as Stupa in historic South Asia and further developed in East Asia or

-It is common to Nepal, China, Japan,Korea,Vietnam,Myanmar,India, Sri
Lanka Nepal and other parts of Asia.

-These are rectangular stone and wood structure with successive roofs, placed one over another making them in some case look like multi-storey edificies.

Pagoda style of temple architecture in H.P. is inherited from Nepal

This type of Structure have hollow upper half of a sphere.
Domes have a long architectural lineage that extends back into prehistory

-In past use of  mud, stone, wood, brick, concrete, metal, 8 and plastic can be seen in these structures

-The symbolism associated with domes includes morte celestial, and governmental traditions that have like
developed over time.

-This style is the direct outcome of the Mughal and the Sikh rule.

-The shrines built in the 18th and 19th centuries by the local rulers are representing the domed style.

Flat roofs are an ancient form mostly used in arid climates and allow the roof space to be used as a living space or a living roof.

In this category shrines have ordinary walls in mud and lime plaster and the remarkable paintings executed in the traditional pahari style around the Ramayana and Mahabharta.