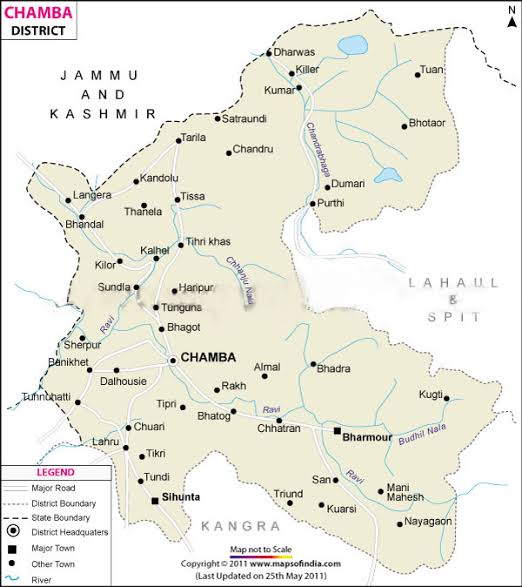 –NAMES-Irravati in Sanskrit and in later Vedic period, it came
to be known by the name Parusini
– ORIGIN– The river Ravi has its source in the mountainous knot of Bara- Banghal area of Kangra district at an elevation of 5000 meters.
– It comes out from the glacier fed Bhadal and Tant Gari streams.

– The total length of the river
d by high with in Himachal Pradesh is about 160 kilometers and enters in PLAINS AT KHERI.
–The maharaja Ranjit Sagar dam is built over this river on its entrance in Punjab.
– It has a catchment area of
tribal about 5,528 sq. kms which accounts 9.9% of the total catchment area of the state.

1. PRINCIPAL TRIBUTARIES OF THE RAVI

THE LEFT BANK TRIBUTARIES
-Chirchind Nala
-Baira- Siul as the famous tributary.of river Ravi runs almost in the centre of Churah tehsil for about 16 to 19
kilometers in its lower course.

-The river Ravi flows through the famous Chamba valley and  known for milk and honey and Chamba town is situated on the right bank of it.

DETAILS OF SOME OF THE IMPORTANT TRIBUTARIES OF THE RAVI RIVER ARE AS FOLLOWS :

A. Bhadal River
–rises from the Bara Banghal area lying between the Pir
Panjal and Dhauladhar Himalayan ranges in the Central Himachal Pradesh.
– It mergers with Tant giri

B.Tant Gari River
–rises as a small stream from the slopes of an off-shoots of the Pir Panjal
range to the east of Bharmaur .

C.Siul River
–rises from the tract lying between the Dhauladhar and Pir Panjal ranges near
Jammu and Kashmir and Himachal Pradesh border.
–The Baira River is the main tributary of the Siul River

2. PRINCIPAL VALLEYS
-Chamba valley is known by the name of valley of milk and honey.
-Geographically, the Chamba valley is situated between the Pir-Panjal ranges in the north and Dhaula Dhar mountain ranges in the south.
-The geological formation of this valley is associated with the Punjab plains and that of the Shiwaliks foundation. -However the geological structure of
the areas all along the river Ravi is of BLAINI formations.
– BHARMAUR, CHAMBA, CHURAH AND BHATTIYAT are thus significant valleys of the Ravi basin.

4. MAJOR TOWNS –
THE BHARMAUR, THE CHAMBA, THE CHAURAH, DALHOUSIE, BANIKHET, BHATTIYAT  HARLA are the important settlements of the Ravi basin.

-Chamba is also known for Nagra and pent roof styles of temples.
-The state BHURI SINGH MUSEUM IS ESTABLISHED THERE IN 1906.
– This place is also known for CHAMBA
RUMAL AND CHAPPAL.
-The Chamba rumal is square piece of cloth of different sizes embroidered
especially for decoration purposes not yet necessarily handkerchief whereas the Chamba chappals are lace less fancy shoes mostly used by women