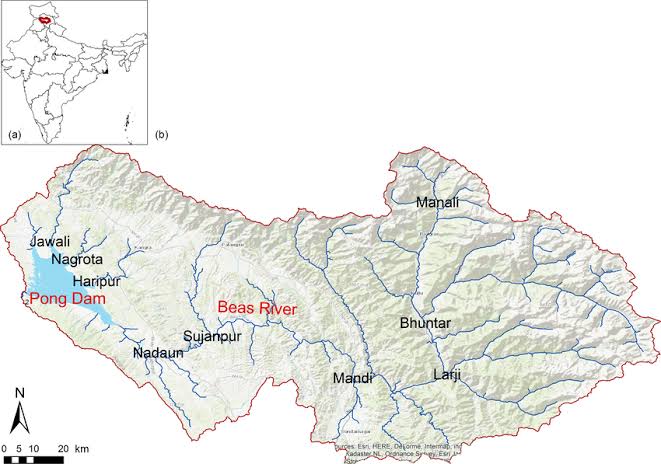 -NAME-Vedic -Arjikiya & Vipasa in Sanskrit
–SOURCE– Beas Kund
in the Pir Panjal ranges near Rohtang pass at about 4000 metres height
-It is a small stream at
its source but collects more water from a spring known as Beas Rishi.
– Parvati, Sainj,and Larji are its main left bank tributaries.
– The Uhel, another important right bank tributary joins the main river near Mandi town
-It traverses for about 256 kilometers within Himachal Pradesh before leaving the state and entering Punjab plain at Mirthal
–where the Pong dam has
been built also known as International Ramsar site.
-Its catchment area in Himachal Pradesh is 13,663sq, kms which accounts to be 24.5% among all the rivers.

–The important characteristics of the River Beas are described below:
1. Principal Tributaries :

Its main tributaries are

-the Parbati, the Spin and Malana nala in the East and the Solang, the Manalsu,

-In Kangra, it is joined by Binwa, Neugal, Banganga, Gaj, Dehr and Chakki from North, and Kunah, Maseh, Khairan and Man from the South.

The Beas enters in Mandi district at Bajaura, Kangra district at Sandhol and leaves it near Mirthal

–. At Pandoh, in Mandi district, the waters of the
Beas have been diverted through a big tunnel and through open Sundernagar canal to join the satluj at slappar known as beas satluj link 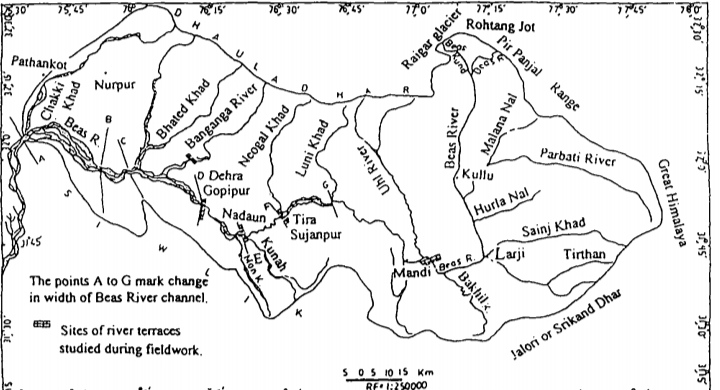 A. Parvati River
– rises from the MANTALAI LAKE situated on the snowy ranges of upstream of
Manikaran in the of the Pir- Panjal Himalayan ranges in the Kullu district.
– It joins the river
Beas at Shamshi în Kullu valley.

B. Patlikuhal River
-rises from the snowy ranges on the Southern slopes of the Pir Panjal

C. Sainj River
-rises from the water divide of the Beas and Sutlej rivers in the lower ranges of
the main Himalayas to the East of Kullu. From here, it flows towards south-west to join the Beas

–it originates from west of Rakti Dhar at an  elevation of 5,500 m and it traverses in the west before joining the River Beas near Larji  . A tributary named Jiwa nallah joins River Sainj near village Suind.

-It cuts across the Dhauladhar range near Larji.
–The Sainj valley is v
shaped as the Sainj River flows in a series of interlocking spurs.

–rises from the base of an offshoot of the Great or main Himalayan range to South-East of Kullu. From here, it follows a south-westerly course and meet Beas at
Larji.
-Here, it also cut across the Dhauladhar range.
E. Harla River
– rises as a small channel from the snows in the depression of the north-western
F. Uhel River
– rises as two feeder channels in the area to the North of the Dhauladhar range
G. Banganga, Luni, Chakki Gaj Khad, Awa, Banner, Manuni, and Suketi Rivers : All these rivers rise from the southern ‘slopes of the Dhauladhar range and they are primarily
snow-fed and rain fed streams.

–Manuni River has steep slopes in its upper catchment area but its lower
course presents sharp fall in its gradients.

Harla river rises as a small channel from the snows in the depression of the North-Western plank of Kullu valley. It joins the river Beas near Bhuntar

I– Phojal-It rises at an elevation of about 4400 meters near Kothlkukli pass and meets Beas River at about 1400 meters elevation above sea level below Katrain in Kullu district. It is a perennial river fed from Talyapat Glacier.

J-Alani. – It rises at an elevation of about 4572 meters near Hampta pass located on Beas-Chandra water divide. It meets Beas near Jagat Sukh village opposite Manal

NOTE- REMAINING RIVERS THAT WE WILL DISCUSS IN FOLLOWING SECTION IS NOT THAT MUCH IMPORTANT AND THERE IS NO NEED TO CRAM ALL FACTS ABOUT  THESE RIVERS. WE ARE PROVIDING INFORMATION TO YOU JUST TO HAVE UNDERSTANDING ABOUT OTHER TRIBUTARIES OF BEAS RIVER(YOU CAN HAVE DEEPER IDEA IF YOU HAVE SUFFICIENT TIME )

-Sun or Sconi Khad-Its name is derived from the gold, which is found in
small quantity in its bed. It rises in Sar-Ki-Dhar hills.

. The important right bank tributaries of lower section of Beas River are as under:

-Uhl-It rises at an elevation of about 4600 meters from the Baria Jot on Sijot
Run Dhar in Bara Bhangal area.

Other left bank tributaries in lower part are-Luni.Rana Khad.Binno Khad,Haroti.Neogal Khad, banganga, gaj, chaki and majority of these rises from Dhauladhar and Chaki forms boundary with Gurdaspur District of Punjab

2. Principal Valleys : The valleys of Kullu and Pin-Parvati lie in its upper course while that of mandi and kangra in lower reach
Valley

A. The Kullu valley.
-is about 65 kilometers long and 1.5 to 3 kilometers broad. the Kullu valley is well known for its greenery, enchanted beauty and natural
splendors
B. The valleys of Kangra and Mandi extend for about 115 kilometers between 500 and 1000
meters height. . The important valleys of the Beas basin in the districts of Mandi
and Kangra as follows :

–Chauntra valley
-is very fertile and thickly populated and it is situated at the base of the
Dhauladhar mountain ranges.
–This valley lies in the Jogindernagar
tehsil of the Mandi district

-Chauhar valley
– is formed by Uhel River- a tributary of the Beas in the north-eastern part
of Mandi district: This valley is runs from north-west to south-east direction.

– Balh valley
– lies between Gutkar in the north to Sundernagar in the south to Baggi in the
east and Galma in the west at an altitude of 800 m in the district of Mandi.
-The soils of the valley are sandy- loam to
loam in texture and light grey to brown in colour.
– indo-German agricultural project was started in this valley in November 1962

-This valley is very fertile, well
irrigated and densely populated.

– This river basin has the distinction of having the first hydro-electric projects of the state known as
Shanan project installed on the River Uhel- a tributary of the river Beas in Jogindernagar
tehsil of Mandi district.

–The Parvati hydro-electric project is the biggest project of
Himachal Pradesh also under operation in Kullu district of this state.

-This river after traversing four districts of the
states mainly Kullu, Mandi, Hamirpur and Kangra leaves Himachal Pradesh near Mirthal in
Punjab.
-With the coming up of the Pong dam also known as Maharaj Ranjit Sagar Dam, this river
merges with the Pong lake and its water is further distributed through the canals in the lower
part of Punjab