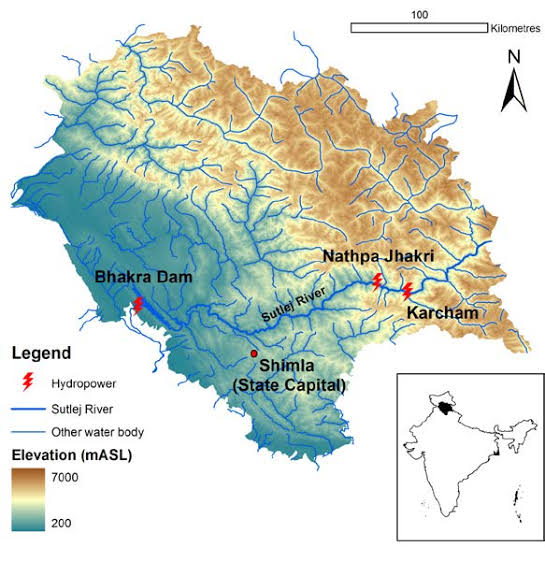 NAME– Vedic -Satudri and Shatadru in Sanskrit
-it is the longest among the five
rivers of Himachal Pradesh.
ORIGIN– It has its source in Rakas Tal Lake near Mansarover Lake on the
Southern slopes of the Kailash Mountain bevond the Indian borders.
– It is also called as Longcchen Khabab River in Tibet.
– It enters the Indian Territory at Shipki-la, lying at an elevation of 4500
metres.

1. PRINCIPAL TRIBUTARIES:
-RIGHT BANK TRIBUTARIES,
the Spiti, the Ropa, the Taiti, the Kashang, the Mulgaon, the Yula, the Wanger,
-the Throng and
the Rupi
–LEFT BANK TRIBUTARIES.
–the Tirung, the Gayathing, the Baspa, the Duling and
the Soldang
-However, the river Spiti and Baspa are the main tributaries
of the Sutlej in its upper reaches.

A. Spiti River
–originates from the mountain pass of Kunjam-La (4520 metres) and Tegpo and
Kabzian streams are its tributaries. Its catchment area too lies in the Pin valley.

-The valley of Hangrang lies in its lower reaches.

– After traversing a length of about 150
kms in the Spiti valley, it meets Sutlej River at Namgia or Khab in Kinnaur district.
-the catchment area of this river is mostly barren and devoid of a vegetative cover.
-The main settlements along the Spiti River and its tributaries are Hansi and Dhankar Gompa.

B. BASPA RIVER
– rises from a glacier descending Nela pass (4480 m).
-It joins the river Sutlej
near Karccham (Kalpa ) on the left bank after traversing a distance of 72 Kilometers.
– The Sutlej River leaves
Kinnaur district in the West near Chauhra and enters the Shimla district.

C. NOGLI KHAD
– joins the river Sutlej just below Rampur Bushahar.
-The river Sutlej enters
Mandi district near Firnu village in the Chawasigarh and passes through the areas of mahunm bagra batwara dehrat and dehar

-rises from the Southern slopes of the outer Himalayan ranges is also knowri as
Sola-Singhi range in the tract to the east of the Kangra valley.

– It demarcates the boundary of
Himachal Pradesh with Punjab and meets the river Sutlej at Nangal downward Bhakra in
Punjab.

2. PRINCIPAL VALLEYS :
-The main Sutlej valley is 160 kilometers from Kinnaur to Rampur
Bushahr and lies in northeast to southwest direction.
-From Rampur downward to Sunni, the
valley is 55 kilometers long and 3.5 kilometers wide.

A brief description of the valleys of the Sutlej River Basin as follows:

A. MALUNG VALLEY lies to the east of Baralacha-la and Kunzum pass . This
valleys lie between the drainage basins of the Spiti and the Chandra.
-The inhabitants of the
valley are the Buddhists.

B. SPITI VALLEY
-lies between 3000 to 4800 m height. The name “Spiti” means “The Middle
PYLand”, i.e. the land between Tibet and India It is characterised with high snowy
mountain peaks, barren rocks, glaciers and gushing mountain streams. There are four
distinct zones of the topography of Spiti valley as described below:
– LOWER REGION– also known as Shain lies on both sides of the Spiti River.
– PIN REGION lies on both sides of the main Spiti River at slightly higher portion of the land
above Shain.
C. MIDDLE REGION called as Bhar lie between the point where Shillahnala meets the main
Spiti river just 3kms above Kaza, and

-HIGHER REGION is called as Tud, includes all those portions of the higher ground lying
above Bhar.

C. NISHANG VALLEY (GYAMTHANG) this valley falls in the Pooh sub-division of the Kinnaur
district. It leads to Tibet and lies in the north of Tirung valley. It is approached from the
Kanum village .The valley is enclosed by two high towering mountain peakS
Gangchha (6063 m) and Gongchua (6288m).