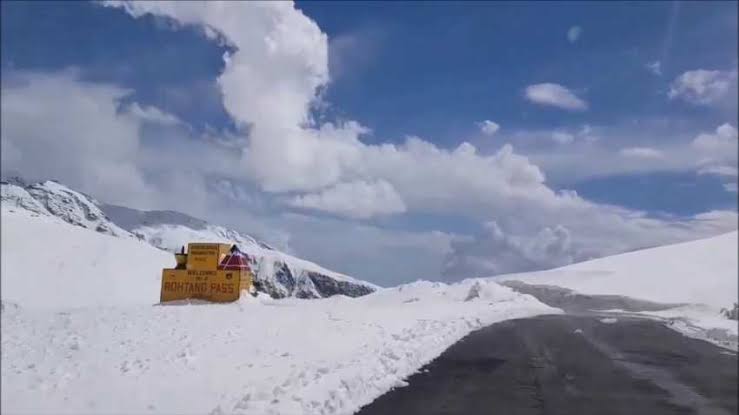 It is known the “pass with cross roads on summit”and the roads from Zanskar, Ladakh, Spiti and Lahaul meet on the top of it.

-It connect Lahul and Spiti with Ladakh of Jammu and Kashmir on Manali-Leh national highway. This pass is once consider one of the most high altitude motorable pass in the world.

3. Hamta Pass –
Hamta Pass lies at an altitude of 4270 meters on the Pir Panjal range in the Himalayas. This pass connect Kullu and Lahul.During descending one meets the historic cave ‘Arjun Gufa’ at Bhanara

-Borasu Pass at an altitude of 5450 meters is a high mountain pass in the Himalaya Mountains connecting Uttrakhand and Himachal Pradesh.

Rupin Pass is a famous trekking pass connecting Sangla Valley of Himachal Pradesh with Dhaula in Uttrakhand at an altitude of 4650 meters.

Chanderkhani pass connect Naggar with famous Malana village in Kullu district of Himachal Pradesh at a height of 3660 meters.

Indrahar Pass is a mountain pass in dhauladhar range of Himalayas connecting Kangra and Chamba district, its famous trekking destination in summer.

Saach Pass is a 4,420 metre high mountain pass in Chamba District, Himachal Pradesh, India on the Pir Panjal Range of the Himalayas. It connects the Chamba valley with the Pangi valleys of Himachal Pradesh.

Shingo La is a mountain pass in India, on the border between Jammu and Kashmir and Himachal Pradesh at an height of 5091 metre.

10.Rohtang Pass
-Rohtang is a famous Pass across the Pir Panjal range on the National Highway to Leh being the world’s second highest road point
The first Englishman to reach the Rohtang Pass was Moorecraft who called it Ritanka Jot
He was followed by a second expedition undertaken
by Dr. J.G. Gerard, Lord Elgin the then Governor
General crossed it twice on the same day in 1863.

Shipki La is a mountain pass and border post with a dozen buildings of significant size on the India-China border. It is located in Kinnaur district in the state of Himachal Pradesh, India, and Tibet, China. The pass is one of India’s border posts for trade with Tibet. The pass is close to town of Khab.

-Kunjum Pass provides the main approach to Spiti from Lahaul.The Spiti area is separated by the great/kunjum Range from where the Spitiriver originates.  This Pass is situated at 60 km from Gramphoo
towards Kazaon the Gramphoo-Kaza-Sumdo road.
Shigri peak in all its grandeur is seenright in front from kunjum pass.

-Local people have built a Goddess Durgatemple on
the Pass now. For crossing, it closes earlier and open later than Rohtang.
-/Located at 4520 mts elevation.

-Debsa Pass is a 5360 metre high (17590 ft) mountain pass in the Himalaya mountains between the Kullu and Spiti Districts of Himachal Pradesh, India.

16.Darati Pass
– It is situated at an elevation of 4720 meters in the
Chambaregion. From Chamba one has to move to
Alyas (4300 mts) via Bhango (2450mts).
– Here starts the steep climb of the Pass. To descend
over grassy and moraine slopes to Tandi (2650 mts)
one has to come down further to Udaipur which is
known for Triloknath temple.

18.Shinghor Pass
– This Pass too is approached from Alyas, lying beyond Dharamshala at an elevation of about 4310
mts. The route is very steep andwaterless.

19.Tempola Pass
– It is situated in the district of Lahaul and Spiti. One
has towalk along Yoche nullaha to the base of this
pass.
-To descend one has to passby Khoksar village (3140
mts). From khoksar either return to keylong or to Spiti via kunzum Pass or may go to Manali via Rohtang
Pass.

20.Waru Pass
– It is between Dharamshala and Chamba at an
elevation of about 3870 mts
– It is very windy, rough and stiff Pass however many
beautiful peaks are visible from its top.

21.Parang La – Parang La is a parallel pass from Spiti valley of Himachal to Ladakh along with Takling Pass

In Chamba region it is situated at an elevation afterwards becomes easy. Descent through Mindhal is easy. This village is known for afamous temple of Kali where a fair is held in August.

LIST OF IMPORTANT PASSES AND AREA WHICH IS CONNECTED BY THEM