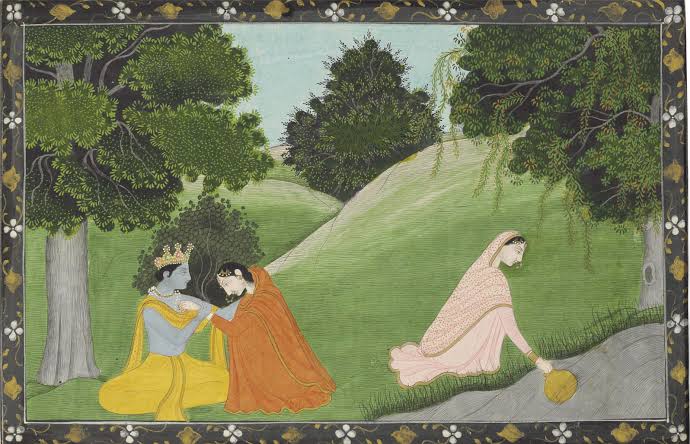 Most of the schools of Pahari painting developed and flourished from
about 17th to 19th centuries in the present state of Himachal Pradesh.

-The Pahari rulers were tributary to the Mughals and they often visited
the Imperial court because of this there is influence of Mughals painting in Himachal Pradesh
-It is believed that this school of painting had originated from the Mughal
style of paintings and flourished due to the patronage of the Rajput
rulers.

The landscape of the sub-Himalayan mountain ranges fascinated poets
and painters who enjoyed the patronage of the Pahari princes. The
ultimate flowering of miniature painting took place in Nurpur, Chamba,
Basohli, Guler, Kangra, Mandi, Kullu and Bilaspur.

Spectacular paintings of Radha and Lord Krishna and Jayadev’s ‘Gita–
Govinda’ are some of the best instances of Pahari schools of paintings.

-It is a general belief that Basohli paintings is among the most ancient
school of Pahari paintings.
-These paintings later developed into the much popular Kangra
paintings.
-The Basohli style of paintings later spread to the hilly regions of Nurpur,
Bilaspur, Kangra, Nalagarh, Suket, Kulu, Mandi, Chamba, Guler and
other places.
-The town of Basohli is situated on the bank of the Ravi River in
Himachal.

-This town has produced splendid Devi series, magnificent series of the
manifestations of the Supreme Goddess. Apart from that, it is also
known for the magnificent depiction of the Rasamanjari text.

–The most famous painter of this school was Devi Das who was famous for his
depiction of RadhaKrishana
-Artist Devidasa painted it under the patronage of Raja Kirpal Pal.

–Gita Govinda of 1730 is also believed to have Basohli origin. and portraits of Kings in their livery and in
white garments.

-Geometrical patterns, bright colors and glossy enamel characterize
Basohli paintings. In those times when the painting culture was in
flourish, the painters focused on the lives of the princes, war, hunting
etc. they also portrayed love themes like the Radha and the Krishna and the
queens of Rajputs.
-The earlier paintings included one major art style called the Basholi style
of painting in Himachal Pradesh which was named from the area from
where it originated.

The major characteristics of
the Basholi style of paintings were its brightly vibrant coloring which portrayed vital emotions.

-Guler School of paintings is believed to be the most ancient type of
Indian paintings Legend says that certain Hindu painters who were trained in Mughal style of paintings commenced with this technique after they sought the
patronage of the Rajas of the kingdom of Guler.

After the decline of Mughal empire many artists trained in mughal style
migrated to the Kangra region as they got
patronage by  Raja Goverdhan Singh in
1774.
-It first evolved in Guler and then
came to Kangra.
-The school reached its Zenith under
the patronage of Raja Sansar Chand
at SujanpurTira.
-Multiple shades of green are used to
paintings.

-Use of Vegetable and extracts of minerals

-The subjects seen in Pahari
paintings exhibit the lifestyle of society of the period. However, the most
popular subjects were the legends of the God Krishna.

-The activity of the Pahari painting continued till the close of the 19th
century
-The changes in this period reflect degenerating standards because of the
prevailing political conditions.

-Chamba School of paintings is famous,
especially for their excellent miniature
paintings which migrated from Guler to
Chamba.
-Some distinguished painters belonging to
this school are MiyanDara Singh, Durga
and Lehru.

–Folk art was also practiced by the Chamba
painters.

-Chamba paintings portray the themes of
Hindu myths like Yashoda, Lord Krishna,
Gopis’, Radha-Krishna and others.

-For the first time Chamba painting got royal patronage under Raja Udai Singh.

-Chamba paintings are quite similar in appearance to Mughal style of
paintings, with strong influences of Deccan and Gujarat style also.

–Nikka was the master artist of Chamba painting