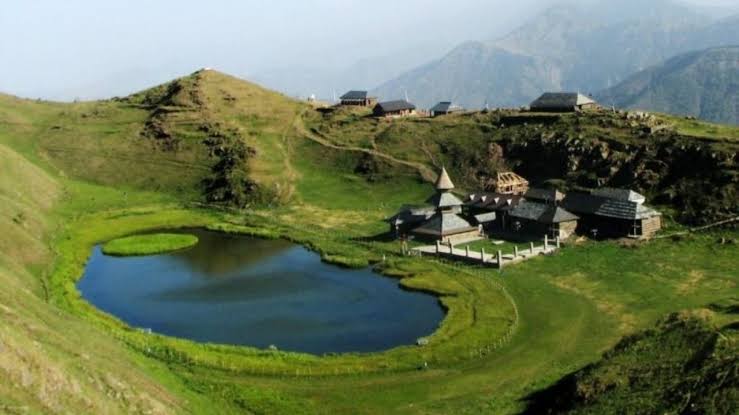 -A small lake called the Kund forms the centre piece of Khajiiar.

-A temple dedicated to Khajjia Nag is also located here.

It is also known as “Mini Switzerland” by swiss envoy Willy P.Blazer on 7th Jul 1992.

-Sign board here indicated its distance from swiss capital Berne.

-It is 166th to be christened as “Mini Switzerland”.

-It is known for its unknown depth and local Gaddi tribe visit this lake on Janamastami.

-It is said to be blessed by kali and protected by shiva.

-It is devoted to maa Kali.

And it is Located at Churah in Chamba district

-This lame is mostly remains covered under Snow

-During summer season ice blocks keep floating in it.

-It is located in Dharamshala,Kangra.

-A temple dedicated to Lord Dhrumeshwar built by sage Agastya is located here and After 15 days of janmashtami a fair known as Radhaashtami is held here.

-it is Formed between Dehra and Pong dam on Beas River built in 1960 and it was declared as sanctuary in 1983.

It is the Only place in india other than Bharatpur(Rajasthan) where the rare red necked grebe has been found.

It is located in Dharamshala and Its water falls into Layun River.

It is located in Chachiot, Mandi

Gold and Silver offerings accumulated at a shrine nearby are thrown in this lake.

-It is known for “floating island”.

-It is also known as “Padmacan” which means lotus possessing and consider this place where spirit of Padmasambhava rests.

-This lake is also associated with Naga Cult or serpent worshipping.

Lake water is floating underground from Rewalsar to “Nagachala”(a 10 km from Mandi on the Mandi-Shimla National Highway).

-There was a king “Arshadhara” of “Zahor” (the Tibetan name of mandi).His daughter Mandarva resolved to renounce her royal ties and dedicate herself to religious order. She took bow before Bhudhist scholar named “Shantarakshita” (believed to be brother of Padmasambhava). One day Padamsambhav came to give her teachings, a cow herder who saw them spread the news that Mandarva was flirting with a man. Angry King put Mandrava inside a hole full of thorns in earth and tied Padmasambhava to a pyre and set on fire. When smoke did not clear off for a week the king visited the same place and found to his surprise the place had turned into a lake with lotus at the centre of the lake. Repenting King offered him his Kingdom and princess was married to Padmasambhava.

There is a sikh “Gurudwara” built in commemoration of Guru Govind singh’s visit.

Situated at the hill top of rewalsar town.

it is on the top of Rewalsar town in mandi.

-it is Formed by diverting water of Beas River to Satluj at slapper.

-It is approximately 30 km from mandi

It is source of Parbati River in Kullu.

it is in Kullu, a panaromic view of Bara Banghal is enjoyable form this place.

It is located Near Rohtang pass in Kullu.

4) Servalsar lake: It is situated on the top of Jalori pass in Kullu.

This lake is source of Pabbar river

2) Tanu Jubbar : it is a small lake located Near Narkanda ,Shimla.

-This lame is located near chhota shali peak

-Its size is equal to Annadale ground of Shimla.

This lake is Famous for skating and loacted Near Nako village in Kinnaur.

2) Sorong lake: it is located near Kinnaur

This lake is shaped like sleeping woman. It was found when mother Renuka was sacrificed by her son Parshuram in obedience to his father.

It is biggest natural lake in HP.

Lies in depression formed by a fault in earth’s crust.

It is located Near shivalik fossil park in Sirmaur.

This lakes is known as lake of sun and source of Bhaga River located opposite Baralacha pass in Lahual spiti.

This lake is known as lake of moon.

It is source of Chandra River.

-It exists between slapper and Bhakhra villages.

-It is largest artificial lake in HP

MAN MADE LAKES IN HIMACHAL PRADESH

5.Prashar lake – Between Bajaura(Kullu) and Mandi