GLACIER-these are masses of ice which flow under the influence of gravity and have their origin in Snowfields.

TYPES OF GLACIERS–
1.Cirque glacier-form in bowl-shaped depressions, called cirques,
2.Valley glaciers -fill former stream valleys with ice as they push outward from their zone of accumulation
3.Piedmont glaciers form when valley glaciers flow out of canyons onto the lowland adjacent to a mountain
4. Ice fields– are confined to large basins or plateaus having tall mountain peaks called nunataks protruding above the ice. Ice fields feed alpine valley glaciers
5. Continental glaciers -are vast, continuous masses of ice that originate in high latitudes and cover portions of a continent or island

-The local name of Glaciers in Himachal Pradesh is Shigri

A. Bara Shigri-
-largest glacier in Himachal pradesh
-it feeds the river Chenab
-it is said that glacier formed Chander tal lake by causing a major Havoc in chandra valley in 1936

B. Chota shigri-east of Rohtang pass
C. Gye Phang–
-known as Manimahesh of Lahaul
-its shape looks like that of Matterhorn of Switzerland

D. Chandra glacier-
-in lahaul spiti
-it has been separated from Bara Shigri glacier
-it is source of Chandra tal lake from which Chandra river originates
-this lake(2.5km) is also known as lake of moon 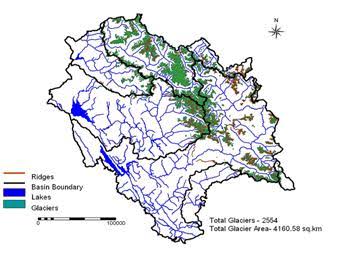 E. Kulti-near koksar
-first sight of the visitors while moving from kullu valley to lahaul valley through Rohtang pass

I. Lady of keylong-
-name was given by Lady Elashainghday about a century ago during british ruling

N. Malana glacier-kullu
-south of indrasan and deotibba peak
-this valley is referred to as the Shangri la

O. Bhadal Glacier-
-south west of pir pnjal in bara banghal of kangra
-it feeds the river Bhadal(tributary of ravi)

Q. Gora glacier–
-has receded in the recent past