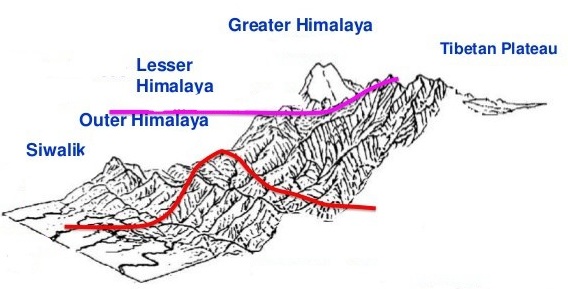 ✓Topographically, the territory of Himachal Pradesh from South to North can be divided into following zones:

✓This part of the western Himalayas which viels the state of Himachal Pradesh from the plains along its Southern boundary, is known as the Shivalik Hills.
✓Shivalik literally means the ‘Tresses of Shiva’ and to the ancient geographers Shivalik Hills were known as the ‘Mainak Parvat’.
✓The hills of the region are composed of highly unconsolidated deposits which results in a high rate of erosion and deforestation.
✓The annual rainfall in this zone varies from 1500mm to
1800mm.
✓This area is suitable for the cultivation of maize, wheat, paddy. sugarcane, ginger, potatoes and citrus fruits.
✓The Shivalik range extends from the river Ravi to Yamuna.
✓These hills comprises the districts of Bilaspur, Hamirpur, Kangra & Una and lower parts of the Mandi, Sirmour Shimla & Solan districts.
✓Hathidhar, the highest (5,256) mountain range in the Shivalik Hills, forms a natural boundary between Kangra and Chamba districts.

✓This zone occupies the central part of Himachal Pradesh.
✓Most of this zone is composed of granite and other crystalline rocks of unfossiliferous sediments.
✓In this zone falls the upper areas of the tehsils of Pachhad and Renuka in District Sirmour, Chachyot and Karsog tehsils of District Mandi; upper parts of Kangra and Palampur tehsils of District Kangra; upper Shimla Hills and upper parts of the Churah tehsil of District Chamba.
✓This zone comprises two mountain ranges viz. Dhauladhar and Pir Panjal.

A) Dhauladhar Mountain Range- 4,550 m (14,927 ft.)
✓Dhauladhar,which means the “Grayish White”, is the outermost portion of the Lesser Himalayas.
✓It branches off from the Great Himalayan range near Badrinath in Uttrakhand.
✓Dhauladhar is also known as ‘Maulak Parvat’ and it lies mainly in the Kangra district.
✓It is intercepted by the Sutlej at Rampur Bushahr (District Shimla), by the Beas at Larji (District Kullu) and by Ravi in South-West of Chamba.
✓Kangra valley is a longitudinal trough at the foot of this range.
✓In Chamba district it forms the Southern boundary of the district and separates it from Kangra district.
✓Dhauladhar range in Kinnaur district constitutes the South-Western part of the district and forms a longitudinal belt along the boundary line between Kinnaur and Shimla, and Uttrakhand in its South.

B) Pir Panjal Mountain Range – 4,000 m (13,123 ft)-5,000 m (16,404 ft)
✓Pir Panjal range which falls mainly in District Chamba is the largest and most impressive range in the Lesser or Inner Himalayas.
✓lt bifurcates from the Great Himalayan range near the bank of the river Sutlej forming the water-parting between the river Chenab on the one side and the Beas & Ravi rivers on the other.
✓It separates Kullu valley from Lahaul valley.
✓It merges with Shrikhand, a mid Himalayan range to the East of
Kullu.

✓The Greater Himalayan range runs along the eastern boundary of the State and is cut across by the river Sutlej.
✓The range separates the drainage of river Spiti from that of the Beas.
✓ This towering range acts as a barrier to the South-West monsoons, thereby depriving the area lying to the North (Pooh, Spiti), of monsoon rain.
✓The famous Zaskar range of this zone is the easternmost range and separates the Kinnaur and Spiti from Tibet,Kashmir and Laddhakh.
✓Shilla (7026m )the highest mountain peak in the State lies in the Zaskar range in Kinnaur district.
✓In this zone falls the District Kinnaur, Pangi tehsil of District Chamba and some areas of District Lahaul-Spiti. 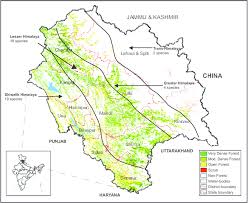