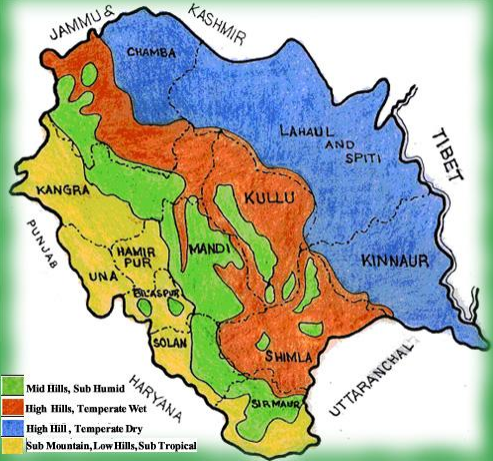 HIMACHAL PRADESH CAME INTO EXISTENCE OF 15 APRIL 1948 with the merger of
TWENTY SIX Shimla hill states and FOUR PUNJAB HILL STATES into a centrally Administered area.

Before this merger the total population of 21 Shimla hill states and their nine
Tributaries was about 10,57,711 and the total area of Himachal Pradesh was
About 11,053 sq. Miles

All these states were combined to form 4 District in 1948
1.CHAMBA
2.MANDI
3.MAHASU
4.SIRMAUR

The headquarters was located in the building of the BritishIndia foreign office at Shimla, which was destroyed by fire on 5-May 1957
This centrally administered territory was headed by a Chief Commissioner
And his deputy
-THE FIRST CHIEF COMMISSIONER WAS MR. N.C. MEHTA AND HIS DEPUTY WAS MR.
E. PENDERAL MOON.
– On 30th September 1948, an Advisory Council was also formed to advise the Chief Commissioner in the discharge of administrative work. The Council consisted of –
A. 3 erstwhile rulers from Mandi, Chamba and Baghat (Solan)
B. 6 representatives of the people were,
-Smt. Lilavati,
-Dr. Y.S. Parmar,
-Mehta Avtar Chand,
– Swami Purnand,

-IN 1950, UNDER THE ‘ABSORPTION OF ENCLAVE ORDER’ some readjustment
Was effected in the boundaries of MAHASU DISTRICT:
-‘KOTKHAI was made
Protectorate sub-tehsil
-KOTKHAI’ area +
Darkoti’ + some areas of KUMHARSAIN and BALSON tehsils.

-Kotgrah was
Merged with Kumharsain tehsil.
– TWO villages of Uttar Pradesh “SANGOG’ AND
BHANDAR’ were included in JUBBAL TEHSIL

-CHABROT area of PEPSU was merged
In KASUMPATI TEHSIL. In exchange of these seven villages, seven villages of
Kasumpati tehsil were given to Punjab. These were:

In 1951, it became a Part C State under a Lieutenant Governor with a 36-member Legislative Assembly and a three-member Cabinet..

– In March 1952, Mr. K.L. Mehta, ICS, became the first Chief Secretary of the State. Popular government in 1952 took upon itself the task of setting up direct link between government and its people.
-Accordingly, in the beginning of 1954, the Department of Public Relations’
Was created to initiate the process of cordial relations and for publicizing
Government activities.
-On 14 July 1954, Bilaspur, a part ‘C state, was merged with Himachal
Pradesh and this once again contronted with the problem of integration of
Two different sets of services.
-two tehsils – ‘Bilaspur’ and ‘Ghumarwin’.
The strength of its Assembly was raised to 41