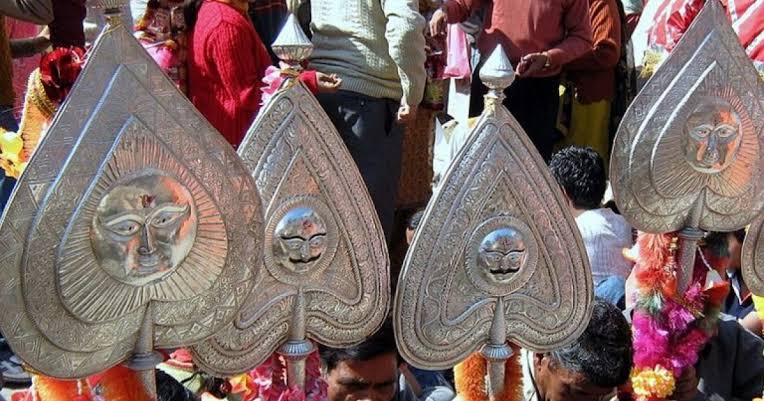 –Skodi a sati fair is held at Dohg village adjoining at Joginder Nagar from 26th to 28th of Chaitra (April) for 3 days.
-It is held in honor of a woman who performed sati.

MAMAIL FAIR-
The fair is held to commemorate the victory of Lord Rama over the demon Ravana and attended by the villagers of the surrounding areas.
-The temple of Mamleshwar at Mamail near Karsog.
-Vijay Dashmi fair is held there every year on the 11th day of the bright half of the lunar month in Asavina (October).
-According to the local legend, Lord Parshu Ram placed 80 Shivlingas in various parts of Karsog tahsil and the 81st was the image of Mamleshwar Mahadev which emerged itself from the ground.

SHIVRATRI
-In the western Himalayan Shivratri of ‘Mandi’ ranks above all. Perhaps it is the only place where the week long celebrations are held.
-It is celebrated in the month of February.
–Two bushes called ‘Paja’ and ‘Karan Gora’ branches are fixed on the upper door frame of each house on this day. This act is done to keep the evil spirits and witches at bay.
-It was declared the first as state fair and then elevated to international status.
-Of many Shiva temples in the town Bhutnath,Triloknath, Panchvaktra and Ardhnareeshwar are most famous, Built in shikhara
–Madho rai is the presiding deity of Mandi since the days of Suraj Sen who ruled the state from 1664 to 1679. He had no heir, as all 15 sons died in his lifetime. So he installed a silver image of Madho Rai and vested all powers to him it also carried the initials of the goldsmith Bhima who made it in 1648.
–God Kamru Nag arrives here on the eve of Shivaratri and is given a reception at the shrine of Madho Rai in traditional manner.
-A grand shobha yatra headed by Madho Rai winds its way to the venue of the mela ,the sprawling Paddal ground.
–Shivratri owes its origin to the birth of the present Mandi town built by king Ajbar sen in 1526. The idol now worshipped in the popular shrine of Bhootnath had been installed by king Ajbar Sen . A big congregation of people along with devtas was invited from all parts of the kingdom to celebrate the birth of the new town on the auspicious Jagrata. Before gods leave Mandi town, they are offered sheets of silken cloth besides fruits and incense.

PRASHAR FAIR
-It is held near the lake Prasher located at a distance of about 40 kms from Mandi town -it is held in month of June.

REWALSAR FAIR-
–Held near Riwalsar
-it is celebrated on the 10th day of every new year according to the Tibetan calendar. Tibetan year starts sometimes in February/March.
-Riwalsar fair is also known as Tsechu/Chessu fair which literally means 10th of Dawa Thangpo