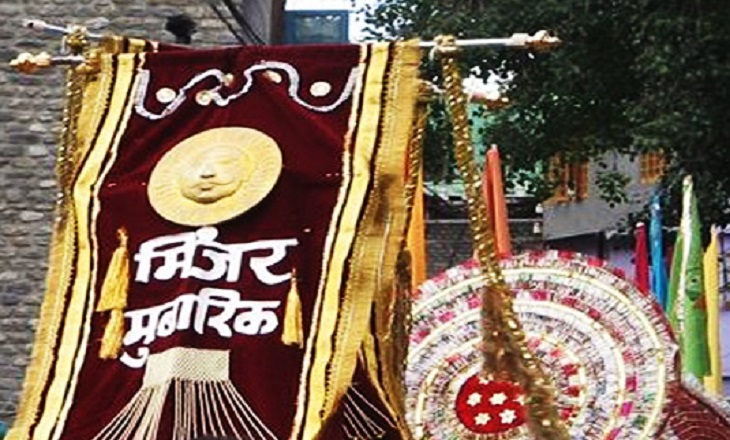 1.SIL OR JUKAROO
It is observed in Magh or Phagun after the Shiva Ratri as a day of rejoicing to mark the advent of spring.

2.MINJAR
–Minjar means Maize flowers.
-It is a state fair.
–Celebrated in chamba at a place Chaugan in August for a week.

A legand:
Ravi had its course through the place side stands the shrine of Rani Champavati and on the other is the famous ‘Hari Rai’ temple. A sage who was staying at Champavati shrine used to swim across the river Ravi to visit Hari Rai temple. To make the Darshan of Hari Rai easily available to the sage and the people, Sahil Varman arranged a week long Yajana and Lord Varuna was prayed for changing the river course. The lord obliged & changed the course.

-It is also associated with victory of Pratap Varman of Chamba against a Kangra ruler.

-Held in Pangi
-This is held In Magh.
-In this Festival At night a people make shell torches called chaink and swing them round their heads and throw at the walnut trees in the belief that if the torch is caught in the branches, the thrower will have a son.

It is held in Bharmaur  in August

5.CHHATTARI JATRA FAIR
It is held in September

Legend
There being no convenient water supply, Raja Sahil Varman was anxious to provide one for the town. He therefore got a water supply scheme made from the Sarota Nallah round the shoulder of the Shah Madar hill, behind the town. Unfortunately, the water refused to take the course, prepared for it. This was attributed to some supernatural cause, keeping in with the superstitious belief of the time. The spirit of the stream must be propitiated and the Brahmans on consultation counseled that either the Rani or her son should be sacrificed.

This fair is Exclusively for woman and children.

7.PHUL YATRA OF PANGI
– held at Killar in Sept- Oct every year. It denotes the starts of a closing season in this snow bound valley. This annual feature of Pangwal Keeps them culturally united.

-Also known as ’ Prithvi pooja’.
Celebrated on the first of Bhadon (middle of August

9.BHOJRI
This festival is held for two days following the Minjar fair and is frequented only by women and girls who is their gay apparel climb the flight of steps to Chamunda temple singing songs and offering flowers.

-This festival is held in Asuj

–The festival seems to be associated with marriage and widowhood

–The rath is a squre frame of wood with a piece of cloth tied round it and is prepared at the Hari Rai temple.
The rathni is the figure of a women made up with clothes, and is prepared in the precincts of the Lakshmi Narayan temple.
All being ready, the people throw their rakhars (Silk armlets) worn on the day of Rakhar Punya at the rath and then the rath is carried to Chaugan where it is joined by rathni which has been brought from Lakshmi Narayan temple. The two figures are made to touch each other and the bearers then rush apart. The rathni is taken to Champavati temple and the rath is carried through the town, brought back to Chaugan and torn into pieces.