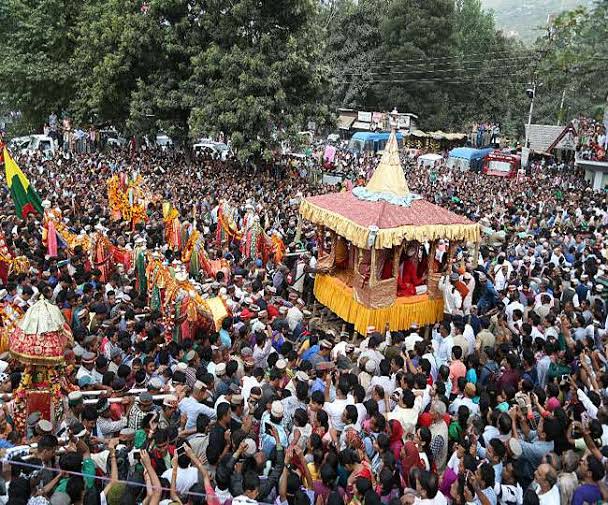 To see the colorful Himachal at one place, Kullu Dushehra is the right place. Although Dushehra is celebrated all over the country, but in Kullu, it has its own distinctive glamour
-Starts on Vijay Dashmi and continues for 7 days.
-It is an international fair.
-The famous idol of Raghunath Ji which is carried from its fixed place in Dhaulapur Maidan to another place across the ‘Maidan’ was brought from Ayodhya in July 1651 AD by Damodar Das and installed by Raja Jagat Singh.
–Sunni and Dharamshala Dushehra were given the status of District level fair on 23rd Sept 2014.

A strong belief that celebrating the festival will bring the wrath of lord Shiva on them keeps residents of the town away from burning the effigies of Ravana his brother Kumbhakaran and son Meghnath as per the tradition on Dushehra. As Ravana was a great devotee of lord Shiva.

According to a version, some people in the town tried to celebrate Dushehra about a decade ago by burning the effigy of Ravan. All of them died before next dushehra.

During Treta Yug, Ravana to have invincible powers worshipped lord Shiva in the Kailash Mountain. He even offered his 10 heads in the ‘Hawan Kund’. Impressed Shiva not only restored his heads, but also bestowed him with powers of invincibility and immortality.

Ravana also requested lord Shiva to accompany him to Lanka. Shiva consented to his wish and converted himself into a Linga. Shiva asked him to carry the Linga and not places the Linga down. As Ravana reached Baijnath he felt the need to answer nature’s call. On seeing a shepherd, Ravana handed him the Linga and went but shepherd kept the Linga on ground and it got stuck

-This fair is organized outside the temple of Tripura Sundari on the ground of Sharhi.
– The festival is celebrated during the month of May-June or Jaishtha.

-This fair is held in village Nirmand of Kullu District on the New Moon Day of Magh month.
-During the starting of the fair, recital of Mahabharata is done and singers sing the story of Raja Bali in the form of songs.
-The fair has many legends associated with it.
-As per the saying, the battle of Mahabharata got started on this day.
-This day also marks the killing of demons who resided at Nirmand disguised in the form of snakes.

This fair is organized in the month of Chaitra at village Dawra. The fair is organized for 2 days. The legend of this fair is associated with Lord Rama and Devi Parvati and lord shiva. During this festival Lord Vishnu and the village Goddess are worshiped by the locals to seek blessings for happy and prosperous life.

This fair marks the victory of Sage Manu and Sage Shandilya over Tundi Raksh, a demon. During this fair, traditional dances like Raksh Khel and Gur Khel are performed by the local artists

In Kullu and Manali held in May

In Kullu at a place Nagmay held in june