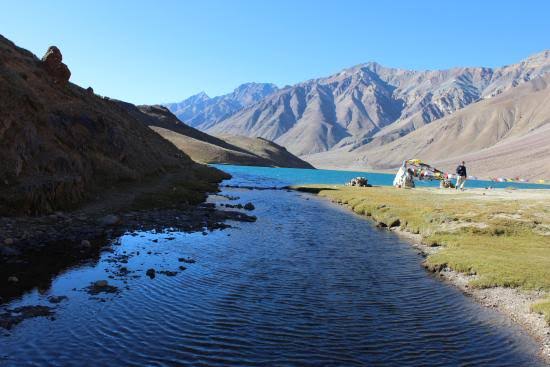 The Chenab (Vedic Asikini)- is the biggest river of Himachal Pradesh in terms of volume of water.

– In the Vedic times, it was called ‘Askini‘ and Mahabharata mentions it as
“Chandar-Bhaga‘.
–The Greek historians referred to it as ‘Acesines‘.
– The origin of the River Chenab
lies in the two upper streams known as Chandra and Bhaga in the Lahaul & Spiti district.
–The river chandra originates at a distance of 94 kilometers from Chandra Tal Lake near Bara-Lacha-la in the Great Himalayan ranges

– The river Bhaga originates at a distance of 64 kilometres from Suraj Tal Lake
at a height of 5500 meters.
– Both of them flow separately up to a place called Tandi beyond which they together flow in a joint stream known as Chandra-Bhaga or the
Chenab.

– legends say ‘Chandra’, the daughter of the Moon and the
Bhaga’, son of the Sun fell in deep love and their togetherness blossomed into the ‘Chandra Bhaga’.
– It travels for a
distance of 122 kilometers in Lahaul and Pangi area of Chamba of Himachal Pradesh before
entering Kistwar region of Jammu and Kashmir.
-catchment area in Himachal Pradesh-  7,850 sq., kms which accounts to be 14.2% among all the rivers.

1. PRINCIPAL TRIBUTARIES OF THE RIVER CHENAB

A. The Chandra, The Bhaga in its upper course above their meeting point at Tandi
B. The Miyar and Thirot nalla meet this river in Lahaul valley
C. Siachu Nalla in the Pangi Valley.

-The Chenab river valley in the district of Lahual- Spiti is known as
Lahaul Valley which consists of three major valleys along the main course of the river Chenab.

-This valley is spread up to a distance of 72 kms from Koksar onwards to its source.

-There is no settlement at all in its upward tracts.

-the Khoksar is the first
village in the Lahaul valley.

-is also known by the name of Bhaga valley
-This valley is also just like
that of Chandra valley and it is devoid of vegetation and human settlements in its upper
course.
-But, below Tandi where the Bhaga meets the Chandra River and their joint flow is known as Chenab, the human occupancy of land becomes prominent.

–The first village along the course of this Bhaga River is Darcha.

C. The Main Chenab or Chandra-Bhaga or Pattan Valley

-starts from the confluence of the
river Chandra and Bhaga at Tandi and its downward journey as a Chenab river is through a structural trough between the southern Pir-Panjal ranges and Great Himalayan ranges and the northern Zanskar ranges.
– densely populated and fertile

–One can reach to this valley from Saach pass. This valley is enclosed by high
mountains
– This valley is densely populated
from Pangi to Zanskar mountain ranges. –Bodhs and Pangwalas are important tribal
communities of this valley.
– The head quarter of the Pangi tehsil is at Killar which also have
the facility of helipad