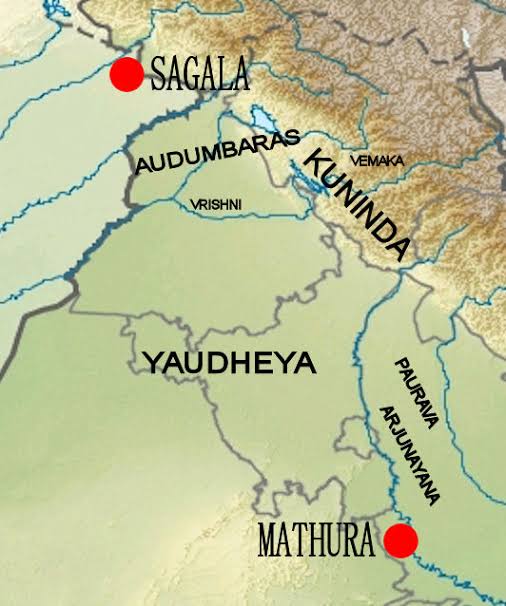 – According to Mahabharata, the  Audumbar were descendant of sage Vishvamitra, who is the founder of gotra ‘Kaushika’.
-The Audumbaras was also known as Udumbaras or Odumbaras, the most prominent tribal community of Himachal Pradesh.
-They were advantageously settled in the route of Taxila to the Gangetic valley and Magadha to Kashmir.
– These areas were Western part of Kangra to Hoshiarpur districts (valley of Beas, or perhaps the wider region between the Sutlej and the Ravi).
-Panini’s reference of this tribe proves their existence in the 5th century BC.

–Buddhist scholar Chandragomin referred them as a section of the Shalvas.
-The Audambaras were also mentioned in Satapatha Brahmana. The used copper and silver coins. The coins bear the name and figures clearly shows the shaiva affiliation of the Audumbaras.
– They are believed to be of Indo-Greek origin and were converted to Hinduism in 1st century BC.
– Ketumbra was famous embroidered clothes of Audumbaras. They were known for trade of cotton, wool and Udumbar (a type of figure) tree medicines.

-‘Trigarta’ corresponds to the modern Kangra, the land drained by the Ravi, Beas and Sutlej rivers.
-The first historical mention of Trigarta is found in the writings of Panini. It is also mentioned in the Mahabharata, Brihat Samhita and the Puranas.
It is believed that Trigarta was the alliance of six states,
1.Kaundopuaratha.

-The square shaped coins found here denotes the existence of an independent republic in the 2nd century BC.
-According to the Mahabharata, Susharman Chand of Katoch dynasty was the founder of Trigarta

– This king sided with Kauravas in the battle of Mahabharata.

-They settled in Jalandhara region and built the fort of Nagarkot which was also known as ‘Bhimkot’or ‘Kangra Fort’. This region holds a prominent place in the history of Himachal.