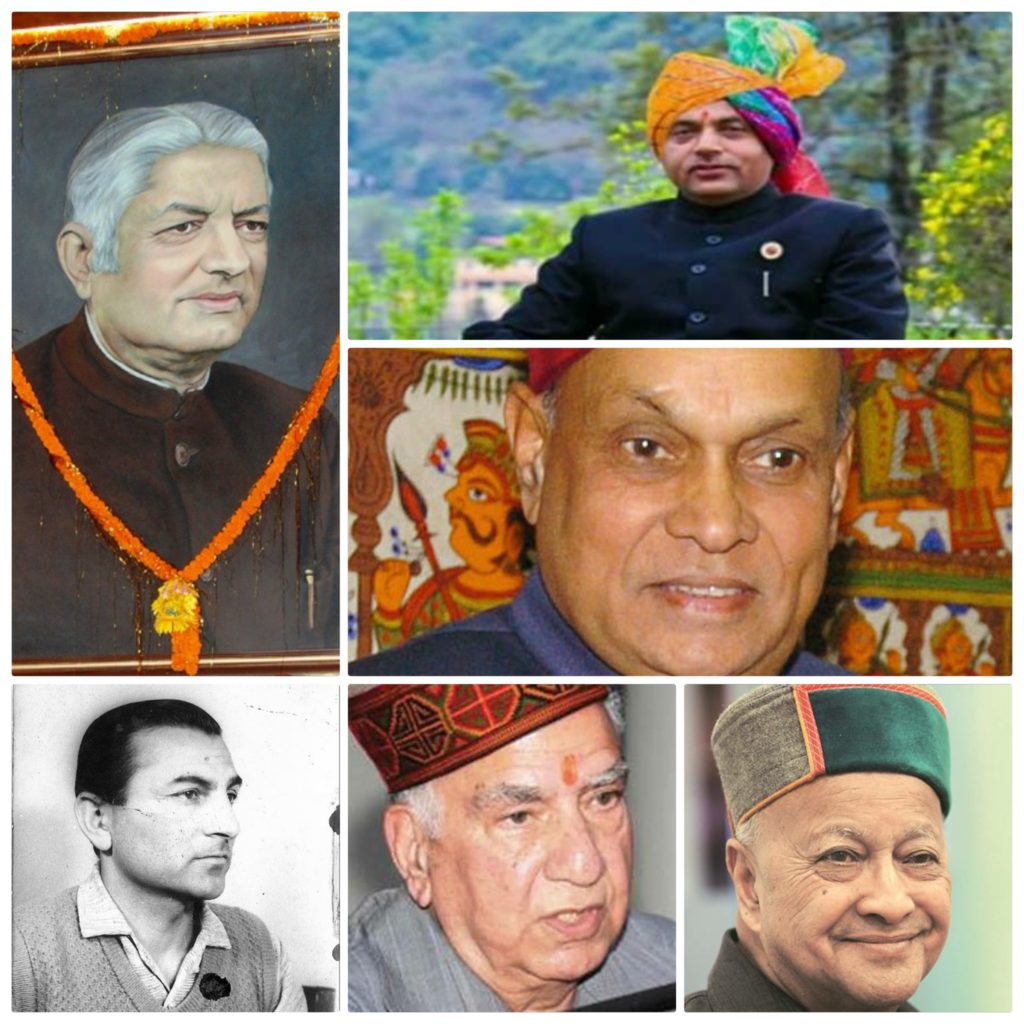 -Like the rest of the north India, The 1977 election was a Watershed in the
Political Theory of the Himachal Pradesh. The Post emergency election
gave a shock to the existing system and opened the door to change in
party system
-In Himachal Pradesh Congress vote fell to 38.6% the lowest ever till then,
as the Party lost all the Lok Sabha seats to Janta party.
-In the Vidhan sabha elections, held few month latter of Lok Sabha
election the congress was routed. It could win only 9 seats in a house of
68.
–The Janta party secured the massive majority by winning 53 seats.
-Janta Party in HP was dominated by the Jan Sangh Faction. Other
Partners constituents likie Congress (0) and congress For Democracy were minor Partner
-Consequently Shanta Kumar of the erstwhile Jan Sangh become the
chief Minister.
-However, His Election as leader of the Janta Legistative
Party was not without a contest.
-In fact a lot of bitterness was created between the Jan Sangh and non-Jan
Sangh fraction of party because of this contest.
-Two years of Janta rule were politically quite eventful. The Jan Sangh Faction used this period to consolidate its support base at the lost of other Constituent of the alliance.

-One of Jan Sangh Strategies was to project itself as the dispenser of the
Justice to the new area, which it argued, suffered discrimination at the
hand of the congress Government which pave the way for politics of sub
regionalism.
-On the other hand only light weights of non jan-Sangh component
found berths in the minister and they were given only the less significant
departments
-Split in Janta Party/congress formed Government & in1979 Large Scale defection was seen

-Now BJP as successor of Jan Sangh when Janta party split in 1979 under
the weight of its internal dissention, The BJP was able to walk away
with most of the organizational network in the state.
–However its Government could retain only 23 of the 53 party legislators
and was reduced to minority in the assembly.
-In mid-term poll of Lok Sabha the congress wrested back all the seats
with 52.1% votes. But managed to poll 35.4% votes.
-This was the turning point in the history of Party system, the two main
Political Parties accounted for 88.5% of the votes polled. A FULL-FLEDGED
TWO PARTY SYSTEM HAD ARRIVED IN HIMACHAL PRADESH.
–The Janta Party’s Performance was very poor and its votes Share were
only 5.3%.
-Failure of BJP to win any Lok Sabha seat in the parliamentary election
from the state, coupled with the return of Indira Ghandi to power at
center had it fall out in state policitics and the Shanta Kumar government
had to bow out.
-Soon the congress was able to form government under the chief Minister
ship of Thakur Ram Lal.

–Congress ruled for another 2 years

POSITION OF POLITICAL PARTIES AND THEIRS UPPORT BASE:

-In short Interlude the Janta Party government in the state (1977-1980) left an uneven impact on two sub regions.
–BJP or Jan Sangh had lost its vote’s base in Shimla region because Shanta
Kumar hostiled people of Shimla region on the issue of abolition of
support Price of apple production.
-Shimla region always remained vote base for congress but after Shanta
Kumar government Apple and potato lobbies had mobilized people
against BJP at Larger extent.
-Like Shanta Kumar, Thakur Ram Lal also tried to maintain and consolidate
his position in his own region and emerged as a regional leader.
-In Contrast to the earlier elections when regionalism had manifested
itself in the form of factionalism within the congress Party added a new
dimension in which two sub regions were mainly represented by two
different political parties and both political parties were plagued by
regionally based factionalism.

–The elections results were on expected lines the BJP dominated the polls in the Kangra region where as congress in Shimla region.
–Congress bagged 31 seats and BJP got 29, though short of a Clear
majority the congress manage to form the Government with the help of
Independents.
–The vote Share of Congress was 42.5%while that of BJP was 35.2%.
-The Janta party was virtually wiped out and could win only two seats on
a miserable 4.2% Votes.
–It is Interesting to note that 20 Out of the BJP’s 29 seats came from the
new areas, on the other hand, out of 31 seats won by congress were only
10 from the new areas. The remaining 21 came from the old areas.
-The 1982 Vidhan Sabha clearly established the fact that BJP had been
able to sell the Argument that the new area were getting a step
motherly treatment form the congress government and only BJP could
Protect the legitimate interest of this region.

–In 1982 election for the first time no political Parties could win a clear
majority, Both the parties try to win over the Independent candidate
after the refusal of the Janta Party to support any of them.
-Ultimately the
congress (1) under the leadership of Thakur Ram Lal succeeded in the
game when out of six Independent, five extended their support to him.

RESIGNATION OF THAKUR RAM LAL AND EMERGENCE OF NEW LEADER
VIRBHADRA SINGH:
-During the regime of Thakur Ram Lal particularly after his reinstallation
as chief minister ship, the forest lobby of Shimla region is said to have
occupied the central position.
-It was reported in the press that large scale illicit felling of tree and smuggling of timber took place during his regime in which his close associates and relatives were alleged to have been involved
-Although he successfully counter the propaganda unleashed by the
opposition Party, but he lost his credibility in the eyes of congress high
command, case was filed in high court and supreme court of India
against his close associates involving in the crime of illicit timber trade.
–Now it was clear that congress High command would decide to install
the new leadership as a result Virbhadra Singh a minister of state in the union government was appointed new Chief Minister of Himachal
Pradesh

INCREASE IN SUPPORT BASE UNDER VIRBHADRA SINGH
-The new chief Minister made it a point to eliminate the growing feeling
of deprivation among the two areas of the state and took some measure
to emotionally integrate the people of the state.
-He succeeded in building an image, cross cutting the regional lines as a
leader of the whole state by balancing the pressure of regional force.
-Thus he manages to secure support Base for the congress Party from
Kangra region as well which could be seen in the upcoming Lok Sabha
elections and Sate Vidhan Sabha election.

-In the mean Time, the complexion of National politics changed after the
tragic association of Mrs. Indira Gandhi in October 1984.

-Her elder Son, Rajeev Gandhi was sworn in as a new Prime Minister of
India to fill the political Vacuum created by her sudden death.
-Rajeev Gandhi decided to dissolved the existing Lok Sabha and the
midterm poll for the Lok Sabha were held in December 1984 and Rajeev
Gandhi was voted to power with the thumping majority.
-Consequently, in the parliament poll the congress Party’s votes in the
state swelled to 67.6% while that of BJP fell to 23.3%.
-The pro congress political environment throughout the country provided
the golden opportunity to the Chief Minister, Virbhadra Singh to hold
the midterm poll in the state also to enable him to relieve himself of the
pressure put on him by the old political guards in the cabinet and
consolidated his hold over the state.
–The data of election results reveal that in 1985, the congress was able to
get a massive majority cutting across regional lines and won all the 18
seats in Shimla region and won 20 out of 26 in kangra region on the other
hand the BJP was completely wiped out from the Shimla region and
could just win 4 seats from kangra region which is said to be the strong
hold of the BJP.
-But the number of seats does not reveal the actual position of
base of any political Party.
–A closer look at the data indicates that the regional Pattern of votting behaviour was still evident.
-In Shimla region the Congress secured 65.50% and in Kangra region
though the BJP could not retain most of its seats, it secure 38% of total
Votes only 2.92% less that it secure in the previous elections.
-Virbhadra Singh, who was sworn in as Chief Minister of the state for the
second time, promised the people even development and fair treatment
to all areas of state.
–The policies adopted by him in his previous tenure as Chief Minister
helped him to win the confidence of the people outside the Shimla
region also.